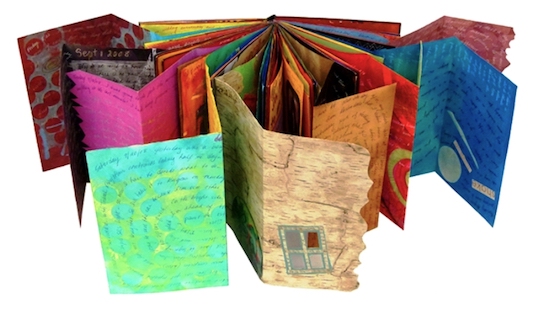 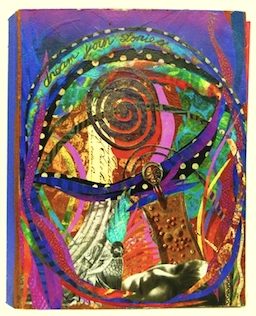 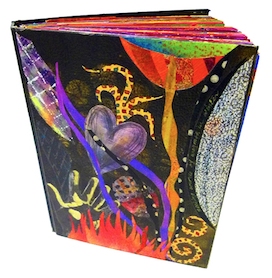 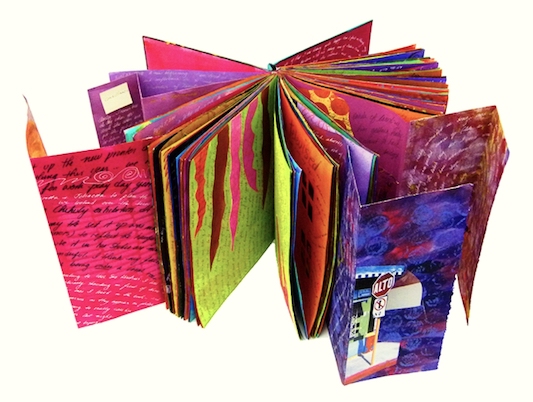 The hole in my life is like an open door swinging wide into the universe. 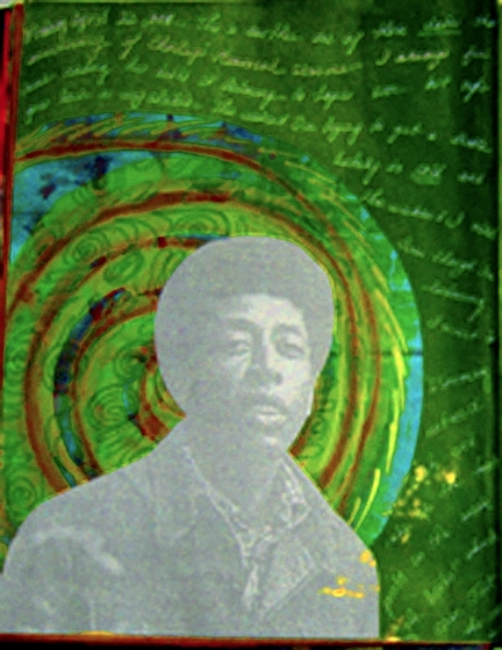 I don’t know where you are or if I will ever see you again in any recognizable way. And that leaves me with a  profound sadness that will never lift. It’s like a shadow lurking in my day, but hopefully, someday, I will not feel so raw with missing you. At least the image of the very sick you is fading and the sexy robust full-of-life you is re-emerging in front of my mind. Liz’s photograph helps.  That’s what I need to remind me of how lucky I was in this life to share it with such a man. A man who could love fully, take risks, not be afraid to challenge with new ideas, a dashing clothes-horse of a man who every teenage girl would have been fantasizing about. A man who had 45 cars in his lifetime, and loved every one of them.  And a man who loved me as much as I loved him.

Art Is My Religion

So even though I woke up accidentally in time to hear the program, I always think of it like church on Sunday morning. It’s a time for good conversation and reflection without the necessity for a church or religion.  I have often said that ART IS MY RELIGION, and truly, it does keep my life in balance. 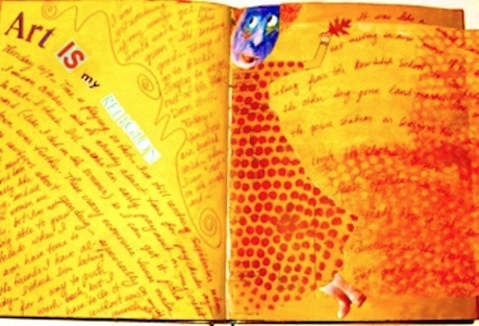 Without it I would just be another compulsive workaholic widow missing my husband and trying to fill the void with stuff. Instead, though, every day I have a chance to transcend my sadness and express something positive or something healing about the power of love.  I can express thoughts and ideas here and share them with friends, and I grow from this connection and our interactions. My life would be so incomplete and dull without art.  I see everything as art: cooking dinner, working in the garden, going to a museum, working on a painting or writing in my books. All of these are part of my growth and unfolding as a complete person again. Of course I would rather be doing these things with Charley here, but I can’t have that so I’ll make the most of what I’ve got.

Even though my cardiologist says there’s nothing wrong with my heart, I know it is broken. I thought of something this morning that is the perfect mantra for this weekend. The essence of the mantra is ‘so Charley’ that it makes me feel like he is still with me whispering in my ear to remind me of how deeply we knew each other’s thoughts and feelings. 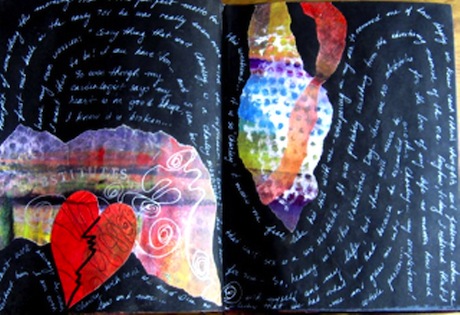 When we first met back in the early ‘70s he was really enamored with the expression: Everything that isn’t sex is a sex substitute. It was probably something that came from an advertising manual of the era.  Anyhow, today I realized that I have my own version: Everything that isn’t Charley is a Charley substitute.  So heading into this Valentine’s Day, there are NO SUBSTITUTES for the love of my life, no matter how much I want there to be.

A Place for Secrets and Dreams 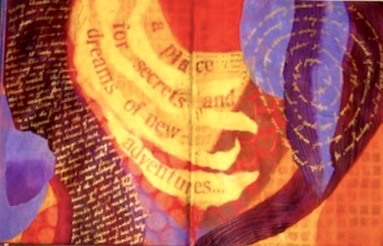 I didn’t even realize I was depressed until I wasn’t going to call Fran back because I knew I would cry if I told her what kind of day I was having.  But I managed to pull myself together, take down the photos in Charley’s studio, and begin the process of converting the space into something else.  The hardest part was throwing out several broken sculptures. And then I broke two more trying to take them off of the bases.  Each one of these pieces represents days, weeks, months of Charley’s life, so each decision was an agony for me.  But I have to move on and salvage what I can of the good times we had.  To get past my sadness, I had to work on the room. I cried, but I made progress. 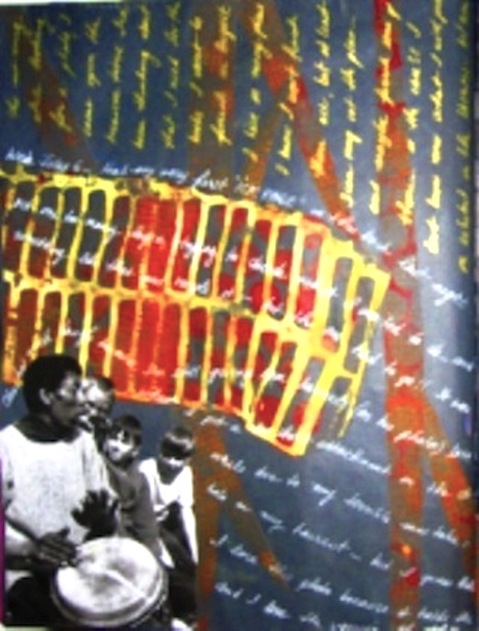 Charley would laugh that I am still giving him haircuts (on his photos) long after he is gone.  But I would never do as bad a job as that day when I put the wrong attachment on the hair clipper and WHAM, a big hole in the afro.

So he had short hair for a while due to my terrible mistake. I often thought about how devastated I would have been if he made a big hole in my hairdo, but I guess that’s why he didn’t get to give me haircuts!

I love this photo because it holds the essence of how he was with kids. They loved him and he loved them. And, I especially love the version of this photo that Melody did after Charley died. It, too, carries the essence of him— joy and meditation through music — especially when made with other people.  He was music for me. 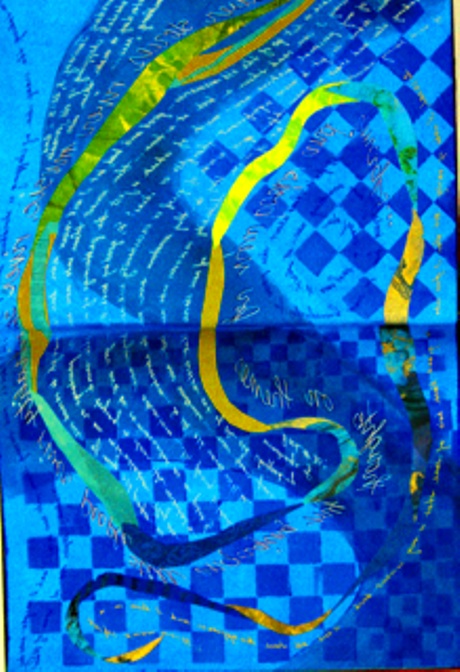 I’m thinking about rivers right now, about their meaning and how they’ve affected human history.  Nile, Amazon, Congo, the Yangtze — they’ve all had civilizations grow up around them.  Often the success or failure of the civilization was shaped and changed by the ability of their river to produce what they needed. Then there is also the psychic and psychological dimension of the idea of river: a river of dreams, river of knowledge, river of stars, river of words. So many layers of our lives take the form of a river’s never-ending flow. The motion — the carving out of rock, the shaping of ideas, or the build-up of boundaries. Like mountains, rivers can divide us, and sometimes they transport us to each other, bringing new ideas. There are so many ways a river can bring change. Sometimes I feel as though life is a river carrying me away from Charley. As my memories and my deepest feelings for him are swept along, I am carried farther and farther away from the life and the love I knew with him. But, at the same time, this river of life is carrying me towards new experiences, adventures and knowledge.

Susan Porter is an artist with a distinctive array of creative talents. She has been an actress, musician, drummaker, teacher, writer, and a book artist for many years. Her handmade books and vivid art journals are both personal and universal in demonstrating the myriad ways the arts help us discover our inner selves, share our vision of the world with those around us, and promote positive social change. She is also one of the founders of the Cooperative Artists Institute (CAI) in the early ‘70s, an organization which empowers people through various programs to solve their individual and collective problems by the Arts as a catalyst for personal and institutional changes. Before her work at CAI, she was part of the creative team at the Boston Children’s Museum, which developed the paper-making and book-making boxes for teachers. Many of her journal books were on exhibit at the Hamill Gallery in a show called Bhairava & Coloring Books in the summer of 2013. They will remain as art of an online exhibition at the Gallery website: www.hamillgallery.com/EXHIBITIONS/SusanPorter.html Please check out her artwork and join her on-going workshops to learn about unique book-making and various art techniques at the website: www.coloringbooksandjournals.com