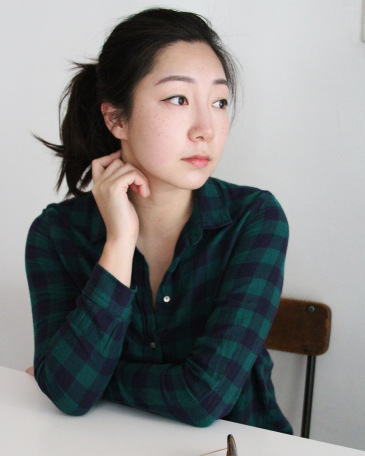 PAIGE RIEHL: Thank you, E. J., for taking time to discuss A Lesser Love (Louisiana State University Press, 2017), winner of the Pleiades Press Editors Prize for Poetry. I’ll open with a question about the book’s first poem, a frontispiece poem titled “Showtime.” This poem’s title made me envision a curtain about to be pulled back, an entertainment about to begin, yet the poem feels like a quiet plea for kindness: “Even inside my greatcoat / of conscience, drunk and white, / please be kind to me.” On one level the request appears to be directed at the reader, yet there’s the sense that the speaker is also asking for kindness from her mirror-reflected self. Would you share a little about this poem’s function as an invitation and a request? Was it evident to you early in the process of compiling your manuscript that “Showtime” would open A Lesser Love?

E. J. KOH: “Showtime” is one of the last poems I wrote for the book. Before I put it on paper, I used to say these things before a reading. I am also a translator, so I opened with the words: Jal butak hapnida. It translates into: Please look kindly on me, or Please be kind to me. It has a cross-cultural pragmatic use for politeness. But the words mean and do things different from their literal translation. For context, one says jal butak hapnida before a performance, showing, or introduction of any sort. Please be kind to me. These words prepare the reader because I may let them down, I may suffer before them, and I may do some things improperly, but in this very moment, I can inspire them to judge me graciously. The curtain being drawn back is real. The curtain being drawn back reveals the truth. The words, having been said and read now, begin to build the world that emerges from behind the curtain. That world, in whatever form it appears, depends on both the speaker and the reader to make meaning of it. Jal butak hapnida is a recommendation, a request, and a caution.

PAIGE RIEHL: In an interview for Seattle Channel’s Art Zone, you noted that your parents moved to Seoul when you were 14 and were gone for nine years while you stayed behind in the U.S. There’s a sense of yearning woven throughout A Lesser Love. At times the speaker’s parents feel both close and absent, the relationships’ push and pull a source of internal struggle. I’m thinking in particular about poems in the first section of the book like “Confession,” “A-802 Adena Luce,” and “1807 Oleander.” How did this separation from your parents influence your writing both during and after your separation?

E. J. KOH: Presence and absence are actors in the book. Presence magnifies absence. Absence does the same with presence. In representing one, the other comes to the foreground. The more I wrote about my mother, the more I felt she was not there. In the writing of these poems, she had still been away. I hope I don’t have to write a poem like the address ones again. They are the different houses I had lived in, and I dared to open the doors again. These are moments I remembered from the places I called home. But I didn’t know if I would have a home again. I think separation made me humble and alone, it made me bored and creative, and it made me daring. Now that I am reunited with my family and beginning my own, I have yet to write a new poem. I don’t know what will come next. If presence and absence were the riggings of my first book, my second would take the task of tearing them down.

PAIGE RIEHL: Several poems in the book’s second section illustrate the violence, pain, and destruction of the Korean War. In what ways did history and personal accounts inspire or inform these poems? What is the role of imagination when it comes to writing about historical events and experiences in poetry?

E. J. KOH: The book may have benefitted from a Notes section because there are references in War that demand an informed reading. But my publisher and I wanted to put them together and have the reader work through them. My grandmother was raised as a Korean Japanese refugee in Ueno, Japan. Japanese occupation, colonialism and the systemic destruction of Korea’s culture, language, and the erasure of their names—these things are not a distant memory. My great-grandfather was murdered, stoned to death, during the Jeju Island Massacre before the outbreak of the Korean War. My mother’s heroines were Korean women who threw themselves into fires, jumped off cliffs, and withstood torture until their deaths. There is a history to the language, a culture-specific emotion from historically-specific trauma that is present everywhere. I gathered the testimonials of comfort women and the public announcements from The Korean War, which is ongoing. For the imagination, I took what could feel far off and brought it up close as humanly immediate. Knowledge has no end of its own. Rather, I am using knowledge to arrive at wisdom.

PAIGE RIEHL: Whether writing about a distant historical event or a more recent trauma, such as the horrifying 2014 sinking of the South Korean Ferry Sewol, you convey the violence and suffering of humanity in haunting ways. Even in the third section, which is titled “Love,” oftentimes love is intermingled with a sense of fear and potential danger. I’m thinking of lines such as “He would discover me washed ashore inside a chest / stuffed with love letters, each one containing a knife with no instructions” in “Icicle Creek.” Within your poems, the language pushes against itself, pulls a reader in surprising directions. When you write, are you conscious of this movement? I’m interested in your process of constructing the line.

E. J. KOH: I used to be a dancer. To me, the stage was…everything because that was where I performed. At the same time, the stage was terrifying. How to perform but not in front of people? I think, in some ways, writing in my room helped me run away from the stage. Dancing was not for me in a lot of ways and that gets clearer to me over the years. But what has remained with me is this performance. When I think of the line, I think of it as a dance, a performance. It must jump out, it must move, it must stall and surprise, it must be fluid, and it must leave the reader wanting.

PAIGE RIEHL: In multiple poems in A Lesser Love, ghosts present themselves and linger in surprising ways. There’s a ghost as “a yard rake—a little spine umbrella” in “Moat,” as preserved and strumming a guitar inside your father’s breast in “My Father the Musician,” as “always sit[ting] in swivel chairs that won’t fit under low desks” in “Ghosts.” Ghosts almost feel omnipresent and more at home than the speaker. Did you intentionally feature ghosts as an anchor between the past and present for the speaker?

E. J. KOH: What a beautiful thing, thank you. These ghosts, in some contexts, were previous versions of myself or others that have died. I think the rake in “Moat” is a ghost, but it is also somebody who died inside me, and who is haunting me, following me around the city. I think, in some ways, it’s the same for my father’s ghost. My father’s ghost is the musician that died, the musician in him that died. In these ways, yes, absolutely the ghosts anchor between the past and present.

PAIGE RIEHL: Tell me a little bit about putting this book together. Organizing a book-length manuscript can be a struggle for some poets, particularly a first book. Did you have ideas about organization early in the process, or was it an organic emergence? Also, since this book won the Pleiades Press Editors Prize for Poetry, was there much, or any, revision or editing as you worked with the publisher?

E. J. KOH: To my surprise, the book won several awards that year. It happened all at once, which was confusing because I sent this book out before and it was rejected everywhere. I wondered, what changed in the book after a year? I was talking to poet Amy Meng about this very thing, and it’s tricky because we don’t want it to be true, but the book is at times a reflection of where we are or used to be—and for it to be accepted, the author must first let it go. When I came back around to revising before sending it out again, I was ready to let go of this book—this thing I was holding onto so tightly. It wasn’t for me anymore, it was something to give away. In the end, Pleiades was a dream. They published my translations before. I knew they supported not only my book, but me as a human being. This is an important distinction. Pleiades supports my career. There was post-revision but not much. It was more ordering that I tinkered with, and more getting around to working on something new.

PAIGE RIEHL: Ah, I love the idea of being ready to let go of the book and somehow that release being palpable to others! The final poem in A Lesser Love is called “Alki the Town of Dreams,” which I’m assuming is Alki Point, Seattle. There’s a sense of acceptance about the past and peace for what may come in this poem, a sense of the sort of letting go you’ve mentioned. The poem opens with the park benches facing east, looking outward and perhaps toward Korea, and it exits with the approach of a man “as casual as a bird sailing into its fullest wingspan / towards me as if he’d been there since the beginning.” Rather than the curtain being pulled shut, this poem hints at the beginning of something new. Was it important for you to exit the book on a hopeful and forward-looking note?

E. J. KOH: I’m so happy to hear this poem. The thing is: I wrote this poem as a template for what I would like my life to be like during a time when I felt utterly lost. Can you imagine how I cried writing this poem, wishing my life to be this way? Years later, I live on Alki. I bought a house here, near the beach, where I see the oysters getting sold, the bikes going up and down the paths, and where I met my husband, and my husband met my family. Ending on this poem is special…because it reminds me to continuously hope, no matter how foolish it seems, or overly fragile, but to keep on.

Authors of the article

E. J. Koh​ ​is the author of A Lesser Love, winner of the Pleiades Press Editors Prize (Louisiana State University Press, 2017). Her poems, translations, and stories have appeared in Boston Review, Columbia Review, Los Angeles Review of Books,​ PEN America, ​and elsewhere. Koh accepted fellowships and scholarships from ​the ​American Literary Translators Association, ​the ​MacDowell Colony, Kundiman, Vermont Studio Center, and ​t​he Jack Straw Writers Program.​ ​She is the recipient of the 2017 ALTA Emerging Translator Mentorship and is co-translating Yi Won’s books When They Ruled the Earth (1996) and The Lightest Motorcycle in the World (2007).