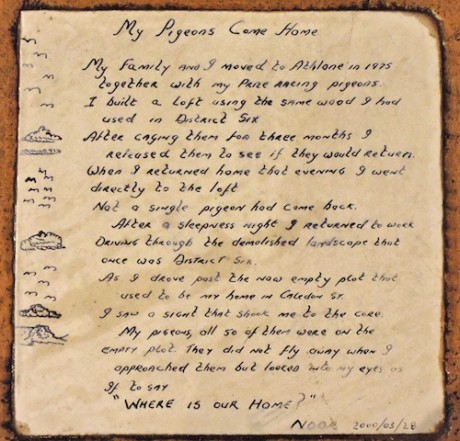 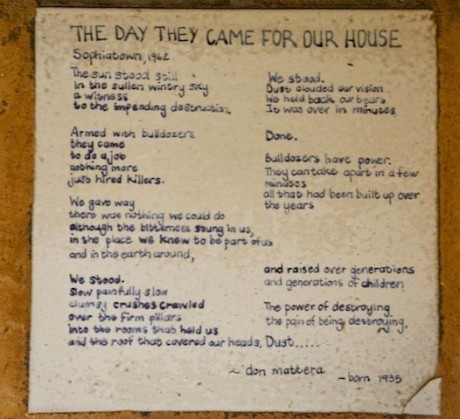 Much of my work in the series of the Quilted Chronicles revisits the history of reclamation, restoration and the landscape of freedom. In this case, the people, places and events of District Six, Cape Town, South Africa are of major significance and public memory.  The interpretation of the events of District Six, the result of the laws of Apartheid, and the attempts to reconcile the land back to its rightful owners and open-ended questions that still remain inspired the creation of this quilt.

On 11 February 1966, the apartheid government of South Africa declared District Six a whites-only area under the Group Areas Act, with removal of more than 60,000 people from their land to be relocated to the sandy, bleak Cape Flats township complex, over twenty-five miles from Cape Town.  Senselessly houses were bulldozed. The only buildings left standing were places of worship. Several primary reasons were given by the apartheid government for the “removals.” In accordance with apartheid philosophy, it stated that interracial interaction bred conflict, necessitating the separation of the races. They deemed District Six a slum, fit only for clearance, not rehabilitation. Contrary to given official reasons, most residents believed that the government sought the land because of its proximity to the city center, Table Mountain, and the harbor.

International pressure exerted on the apartheid government stalled rebuilding and most of the area remained undeveloped.  With the legal end of apartheid in 1994 there were campaigns to restore District Six to its original inhabitants and their descendants by the ANC.  ANC election broadsides boasted “DP + NNP Stole Your Homes, ANC Gives District 6 Back.”  By 2003, work had started on the first new buildings: 24 houses that will belong to residents over 80 years old. On 11 February 2004, exactly 38 years after the area was rezoned by the government, former president Nelson Mandela handed the keys to the first returning residents, Ebrahim Murat, 87 and Dan Ndzabela, 82. About 1,600 families were scheduled to return over the next three years.[1]

The quilt features a map of District six and symbols in the quilt include doors that open and close, embroidered floating keys that are yet to be awarded to their proper owners, rays of light that envision a new day dawning.   Mandela and the blue sun symbolize stilled negotiations by forces in opposition to his efforts, the work of the Hands Off District Six Committee and the slowed progress of the District Six Beneficiary Trust with their broken negotiations to give claimants their land back.  A political slogan of the ANC that promised to restore the community to its original inhabitants inscribes the door.  The question of when and how is a story of restoration yet to be realized.

L'Merchie Frazier, mixed media artist, quilter, holographer, educator, historian, and poet, creates visual documentation to provide discourse on public memory, human rights, social justice and change. Her life-long journey is "Save Me From My Amnesia" embodied in her series of works: The Quilted Chronicles. She is an award winning artist with works in the permanent collections of the Museum of Arts and Design, the Smithsonian Institution, and the White House. Her recent work can be found at www.aboutplacejournal.org